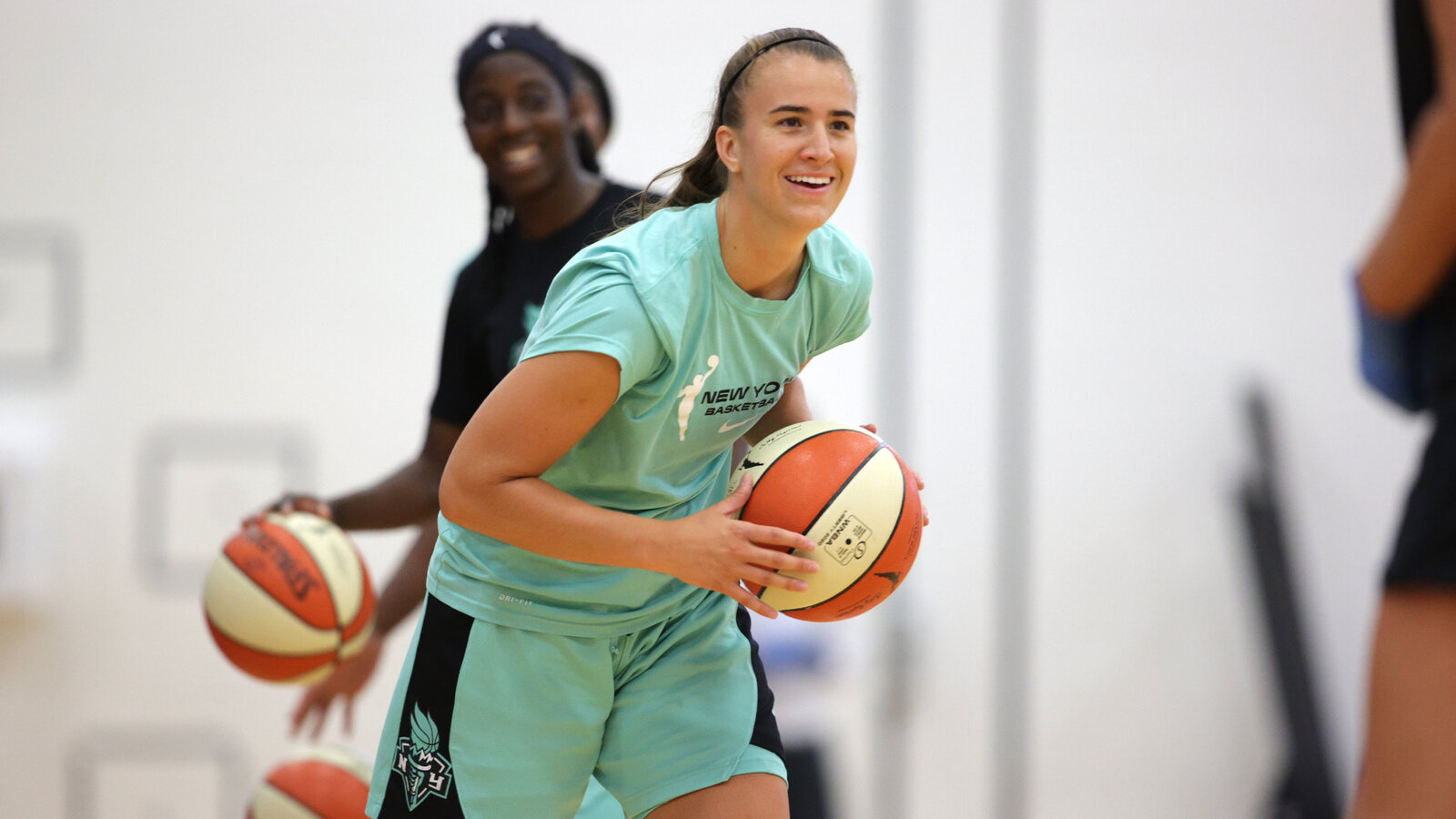 The W.N.B.A. season begins Saturday with everything a basketball fan could want, from a wave of intriguing rookies to a slate of superstar veterans ready to win another championship.

Below, our reporters tell you what to expect this season in the W.N.B.A.’s Eastern Conference. (And click here for our preview of the race in the West.)

If you were hoping to see the Mystics light up the league and repeat as W.N.B.A. champions, you just may want to reserve those plans for 2021.

After the Mystics added Tina Charles in the off-season through a trade with the Liberty, few doubted that this team would be the favorite to hoist the championship trophy once again. But Charles, who has extrinsic asthma, will not be suiting up after receiving a medical exemption amid the coronavirus pandemic. Washington was already without the veteran guard Kristi Toliver, who was traded to the Los Angeles Sparks, and two other key players from that championship team have opted out this season to focus on social justice reform (Natasha Cloud) and family safety (LaToya Sanders). And if that wasn’t enough to shake your confidence in this team’s chances at a repeat, the odds that Elena Delle Donne, the reigning Most Valuable Player Award winner, will play this season are slim to none; the league denied her request for a medical exemption — she has Lyme disease — but she has said she is not sure if she will play.

About 55 percent of the Mystics’ offensive possessions last season relied on players who will not be contributing this season for one reason or another, which means the remaining championship core will have to find other ways to win.

Emma Meesseman, last season’s finals M.V.P., will most likely become the No. 1 scoring option. Aerial Powers and Ariel Atkins will have to exhibit all-star performances almost nightly. The newly acquired Leilani Mitchell will be expected to start at point guard and need to bring that fire efficiency from last season. (Mystics fans have etched in their memories the eight 3-pointers she sank against them last year.) While the addition of Essence Carson, Alaina Coates and Shey Peddy will bolster the roster, it just won’t be enough to keep that trophy in the capital.

The Liberty will enter the 2020 season with a first-time head coach in Walt Hopkins; the first overall draft pick, Sabrina Ionescu; and six other rookies. “I think, for us, this is going to be a foundational year,” General Manager Jonathan Kolb said in a Zoom conference call with reporters. “It’s going to be a year that we look back on, hopefully, years down the line, and say that’s when this all started.”

The inexperienced roster will try to post a winning record for the first time since 2017. The five-year veteran Amanda Zahui B. isn’t worried. She said this roster would be known for being fearless. “We have nothing to lose,” she said in a call with reporters. “Nobody really believes in us but ourselves. So we’re just going to go out there and prove everyone wrong.”

Limited outside distractions and a young team may create the perfect conditions for Hopkins’s coaching philosophy to ignite. In the off-season, each player on the Liberty was not only quizzed on Hopkins’s playbook, but also responsible for teaching a specific scheme in small virtual meetings known as the Quarterback Club.

“Before getting here, I knew every single play, and I think that’s helped my transition a little bit because now I’m just reading instead of trying to memorize plays at the same time,” Ionescu said in a call with reporters.

Hopkins is encouraged by the learning pace of his team. “I think we still have a long way to go in a lot of regards, but the bright spots have been very bright, put it that way,” he said in a call with reporters after practice on July 17.

Zahui B. and Layshia Clarendon, who signed with the Liberty in free agency, will be tasked with leading this team, with help from the only other players with at least two years in the league: the UConn alumnae Kia Nurse and Kiah Stokes.

After a historically frenetic free-agency period across the W.N.B.A., the Sky kept their core largely intact under James Wade, the reigning coach of the year. That group will aim to build on Chicago’s surprising 2019 season, when it advanced to the second round of the playoffs before losing a heartbreaker to Las Vegas on a wild steal and last-second heave by Dearica Hamby.

The third-year guard Diamond DeShields is coming off a breakout season, when she led the Sky in scoring and became an All-Star. Also back are the veterans Courtney Vandersloot (who for three years in a row has set single-season records for assists per game), Allie Quigley (who led the league in 3-pointers made in 2019) and Stefanie Dolson. Those players are a big reason Chicago ranked second last season in points per game (84.6) and offensive rating (101.6 points per 100 possessions), trailing only champion Washington in both categories.

Azura Stevens, who was acquired in the trade that sent Katie Lou Samuelson to Dallas, could be the Sky’s X-factor. Stevens, a third-year forward, has recovered from foot surgery that limited her to nine games last season. She’ll be expected to help fill the production void left by Jantel Lavender (foot surgery) and to lift a Sky defense that last season ranked ninth in efficiency (100.1 points allowed per 100 possessions).

The Sky’s other notable addition is Ruthy Hebard, a first-round draft pick, who starred alongside Sabrina Ionescu at Oregon.

With tons of built-in chemistry entering a bizarrely truncated season, the Sky could be a sleeper finals pick.

The Dream are going to Hollywood. As for most of those who make the trip, the payoff may not be immediate.

Chennedy Carter, who goes by the nickname Hollywood, has been overshadowed and underrated. Yet the Dream’s No. 4 overall draft pick isn’t being overlooked by her peers. Seattle Storm guard Sue Bird once said on her Instagram Live show, without pause, that Carter would be the best player in the 2020 draft class.

That’s high praise from Bird, who watched as Carter, then a Texas A&M junior, dropped a collegiate-record 34 points against her Team U.S.A. in November. The Dream will need all of Carter’s scoring potential after a 2019 season in which they were last in average points per game (71.2), offensive rating (91.6) and field-goal percentage (37.1) behind a league-worst 8-26 record.

The Dream will rely heavily on Carter and Courtney Williams, another of Atlanta’s 10 new faces, with Tiffany Hayes and Renee Montgomery, two of the three top scorers, having opted out of the season. Williams, a bold personality who has also been underrated in her four-year career, has experience carrying a squad. It might take Carter, a versatile guard dripping with confidence, a bit longer.

“She does a lot of incredible things,” Coach Nicki Collen said on a Zoom call with reporters, “but she’s going to make a lot of mistakes as a rookie and so we’re going to have to learn to live with her mistakes and teach her to play through them. I think there’s going to be a lot of things that are a little different for us.”

Depending on how well the group jells — a priority in the off-season — the Dream could surprise. It’s the start of the future for Atlanta behind its sleeper Rookie of the Year Award candidate.

The first matchup is against the Washington Mystics, the defending W.N.B.A. champions — and her old squad.

“I don’t know if that was by design by the league or what — perhaps — but yes, I’m very familiar with Washington, obviously, but it’s exciting,” Stanley said. “I told our team, you know you only get to be a champion if you play the champion, and so the path for our growth and to the playoff and championship rounds is to play teams like Washington. What better way to start the season?”

Stanley, a member of the Women’s Basketball Hall of Fame in Knoxville, Tenn., who had been a Mystics assistant coach since 2010, is now at the helm of a solid mix of proven veterans and young, promising talent.

But don’t call it a rebuild. This team is looking to compete now.

They certainly have the pieces: Returning veterans, including Candice Dupree, Teaira McCowan and Victoria Vivians — back after sitting out last season with an A.C.L. tear — and a backcourt featuring Kelsey Mitchell, Erica Wheeler and Tiffany Mitchell. Also on tap is the 2020 No. 3 overall pick, Lauren Cox, and guard Julie Allemand.

But an uphill climb awaits: Their last winning season was 2015, they haven’t reached the postseason since 2016 and they finished last year ranked fourth in the East at 13-21.

“We want to establish a culture of winning and a culture of players playing hard and playing together. I would expect you will see us improve each time we go out there,” she said. “That’s what good teams do, what championship teams do.”

The overstuffed backpack straining the shoulders of DeWanna Bonner’s 6-foot-4, 143-pound frame that September day was the perfect symbol of Bonner’s 2019 season with the Phoenix Mercury. She leaned into the microphone to answer questions after the team’s first-round exit from the playoffs, capping a season in which the forward-guard started at every position at least once, and endured a stretch in which the Mercury dressed only six healthy players.

Five months later, Bonner stunned Phoenix fans by demanding a trade and landing with the Sun, allowing her to share the court with the young stars who had powered the team to an exciting five-game finals series the year before.

Then the coronavirus struck, and Jonquel Jones, a dominant center, opted out of the season, leaving giant holes on both ends of the floor, especially on the defensive side. Additionally, to acquire Bonner, the Sun had to part ways with the starters Courtney Williams and Shekinna Stricklen.

With Sun stalwarts Alyssa Thomas and Jasmine Thomas returning, Bonner — just under one month short of her 33rd birthday — should expect to play a significant role and, yes, maybe big minutes. But her time in Connecticut should be nothing like her recent season in Phoenix. Sun Coach Curt Miller has filled out the roster with agile post players, the rookies Kaila Charles and Beatrice Mompremier. The Sun also brought in Briann January, with whom Bonner played in Phoenix, and Kaleena Mosqueda-Lewis, a 2018 champion with the Seattle Storm. And with the speedy guard Natisha Hiedeman, a fearless rookie during the Sun’s 2019 finals bid, rounding out the cast, the potential is there to burn the competition, if the chemistry is right.

As for Bonner, she’ll dominate when needed — from any position.

Simon Cowell breaks his back falling off electric bicycle, will miss this week’s ‘AGT’ live shows